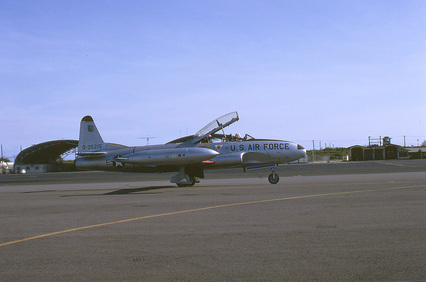 FWAM's T-33 in USAF Service
The two-place Lockheed T-33 Shooting Star was designed for training pilots already qualified to fly propeller-driven aircraft to fly jets. It was developed from the single-seat F-80 fighter by lengthening the fuselage about three feet to accommodate a second cockpit. Originally designated the TF-80C, the T-33 made its first flight in 1948. More than 6,500 T-33s were built. In addition to its use as a trainer, the T-33 has been used for such tasks as drone director and target towing, and in some countries even as a combat aircraft. The RT-33A, a reconnaissance version made primarily for use by foreign countries, had a camera installed in the nose and additional equipment in the rear cockpit. The T-33 is one of the world's best-known aircraft, having served with the air forces of more than 20 different nations over several decades.

LEARN MORE ABOUT THIS AIRCRAFT
Powered by