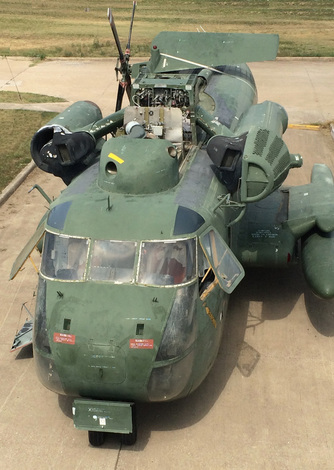 The CH-53 waits patiently to get in the yard with the other aircraft. Final assembly will occur once there.
The CH-53 Sea Stallion is the common name for the Sikorsky S-65 family of heavy-lift transport helicopters. These were originally developed for use by the Marine Corps as they sought a replacement for the piston powered helicopters in 1960.

In March 1962, the US Navy's Bureau of Naval Weapons, acting on behalf of the Marines, issued a request for a Heavy Helicopter Experimental or HHX. The specifications dictated a load capability of 8,000 pounds with an operational radius of 100 nautical miles at a speed of 170 mph. The goal was for an aircraft to for assault transport, aircraft recovery, personnel transport, and medical evacuation roles. Sikorsky won the contract in July 1962.

The first YCH-53A prototype flew on 14 October 1964 production CH-53s began in 1966. The first CH-53A arrived in Vietnam in January 1967. A total of 141 CH-53As were built, including two prototypes. The Navy used a version of the helicopter along with the Air Force who ordered the HH-53B in September 1966. The Air Force called theirs “Jolly Green Giants.” The Marines order a more powerful version – the CH-53D – in 1969. Two of these served as Presidential, VIP transports.

LEARN MORE ABOUT THIS AIRCRAFT
Powered by